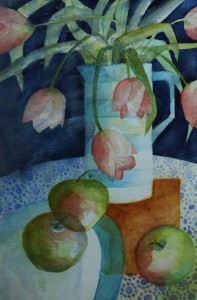 There is no mistaking the influence Shirley Trevena is having on the paintings I am doing at the moment. I had an argument with myself about this today – is it alright to copy a style and I came to the conclusion that it is. Learning from someone else’s process gives you tools that will help define your own style. Even the old masters had and were students themselves, learning at the “Master’s knee”.

One of the things that I have learnt from Shirley is that you should allow yourself to experiment – it is after all, just a piece of paper. I spent two days this week painting what at appeared to be a reasonably good piece – at least, it was until after a sleepless night, I leapt in with both feet. The problem came because I had not spent enough time preparing my sketches and had thought that the little blank corner made nice composition. Only I had no idea what colour I was going to fill the empty space with. And the result was a horrible mess. I threw the now offending piece on a pile under my work table. Placing a pre-cut mat over the side with which I was happy, I found that it made an acceptable smaller piece. Lesson for the day is, do not despair, a disaster rarely covers an entire painting and smaller sections might be redeemable.